Has it really been that long since I posted? Oops! To be fair, I’ve been on holiday and, even though I was only away for a week, I feel like I’ve only just got back into the swing of things because life had been so hectic just before holiday and immediately afterwards with one major activity taking a lot of my time: the launch of the first Write Romantics anthology!

I can now officially say I am a published writer with both an e-Book AND a paperback to my name. But when I first said that to my husband on the launch of ‘Winter Tales’ on 8th November, he frowned and said, “But you’re already a published writer.” And he was absolutely right. Because, in 2010, an anthology was launched that also featured a short story I’d written.

Back in 2009 when I entered the English Heritage competition to feature in an anthology of short stories set at or inspired by local landmark Whitby Abbey, I had no expectations of winning. Short stories aren’t really my thing, either as a reader or a writer and, but I felt drawn to the competition. I live just down the coast from Whitby and it’s a place I’ve visited since childhood and have always loved. I have fond memories of visiting there with my parents, my grandparents, as a Brownie, Guide and Ranger, and more recently with my own family. The other pull was that one of the judging panel was G P Taylor whose kind words about my work during his creative writing course had made me believe I could write. The entries were anonymous so this certainly wouldn’t have any bearing on my winning or not but it felt like there were two strong draws that I couldn’t ignore.

An idea formed but I absolutely left it until the 11th hour to get it right, submitting it at 2 minutes before the deadline. I knew it wasn’t perfect but I also knew that having a three-year-old, a full-time job and a long commute to work meant I’d had no time to make it any better. The winner was announced and, unsurprisingly, it wasn’t me. An email several months later had me shaking with excitement, though. Fifty other entries had been selected to feature in an anthology that would be sold in aid of Whitby Abbey and my story was one of them! I vividly remember the day I heard. I was at a team meeting in Croydon and we’d taken a break during which I’d checked my emails. I had to share my news with the team the moment we reconvened. I’m not sure anyone quite got it but I couldn’t wipe the grin off my face because, for me, this was the first step: an official confirmation that I could write because I’d been selected as one of the best. 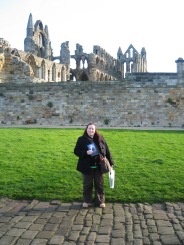 It took an eternity for the book to be pulled together and it was late 2010 before it was launched. It was available on Amazon but, as Whitby Abbey is just up the coast, I had this vision of us making a day trip of it. I felt a bit silly suggesting this to my husband as I felt like I was making a big deal out of something really minor. I kept hoping that he’d suggest it himself. Isn’t that what the hero would do in a romance novel? He’d suggest a day out but drive to the Abbey instead and have a bottle of champagne and a cake discretely tucked away in a backpack to be whipped out at the appropriate moment. I won’t go into what did happen but it wasn’t that and the whole experience felt pretty flat and unreal. I had the book in my hands but I didn’t feel like a published writer at all.

Roll forward four years and, on 8th November this year, we launched the e-Book of the Write Romantics charity anthology: Winter Tales – Stories to Warm Your Heart. We had an online Facebook party which seemed to go well. We even had guests who weren’t anthology contributors attending! I still didn’t feel like a published writer, though. I reasoned it was because I didn’t have a physical book to hold this time and I’d had to download the anthology onto my Kindle as a test so it wasn’t like I’d had the chance to download it as a buyer and have it suddenly appear on my Kindle.

This Saturday the CreateSpace proof copy of our paperback arrived. I’d been out for the day with the munchkin as Santa had arrived in the harbour for a parade to his grotto (don’t ask) so I didn’t get the Amazon package until late in the afternoon. Hubby nonchalantly drifted down the stairs while I removed my coat and said, “This arrived for you.” Eek! The proof! I actually felt quite nervous about opening it, especially as hubby was also dying to see it so was hovering. 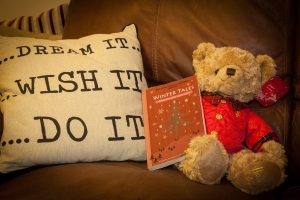 Don’t get me wrong, I’m exceptionally excited. I just don’t feel different. But perhaps that’s the point. Perhaps there is no different feeling. Hmmm.

While I ponder on that one, I’d love it if you could bob on over to Amazon to order Winter Tales. It’s available as an e-Book here and paperback here. All proceeds are split equally between Cystic Fibrosis Trust and Teenage Cancer Trust and the book would make a fabulous stocking filler. Go on, you know you want to …

Back to top
Deborah Klee

Inspired by my PMDD

Books, life, inspiration.... and my PMDD

Inspired by my PMDD

Books, life, inspiration.... and my PMDD