I’m always keen to experience anything that will help me improve my writing. I’ve got a shelf full of ‘how to’ books about all aspects of writing that I dip in and out of from time to time, and I would absolutely love to go on a writing workshop but I simply don’t have the funds. However, when hubby spotted an advert for a one-day script-writing workshop at our local theatre for just £30, I immediately signed up.

As a novelist, I’ve never considered scriptwriting before, but my books are very dialogue-led and scripts for plays are all about the dialogue so I thought, ‘why not give it a try?’ Earlier this year, I challenged myself to write a short story for The Write Romantics charity anthology, ‘Winter Tales’ (still available on Amazon here in paperback and eBook formats) and I really enjoyed the experience of writing in a different way to the norm so I figured that scriptwriting could be another great diversion.

I had no idea what to expect. The blurb in the programme simply said: “…gain an insight into the way scriptwriting works … come along and discover how to create your very own original piece of drama.”

There were eleven of us on the workshop at Scarborough’s Stephen Joseph Theatre. Two of the delegates were college students, then there was me in my early forties, and all the others were in their late fifties or older so that made for quite an eclectic mix.

The workshop started with a brief discussion on the difference between scriptwriting and novels, then we explored different types of scriptwriting: plays, TV and films. Our tutor explained that scripts were made up of three components – story, characters, setting – and that the day would focus round these.

Then we moved into a series of activities. I confess that I was a bit thrown by one of the morning activities because it involved working in pairs and, because there were odd numbers, I ended up working in a trio. I work in a team all the time in my day job but I’ve never tried writing with anyone else. It was really hard. I’d been asked to develop a character and the other two had a place each. Our task was to develop a story with that character and the two settings. Sounds like a fairly easy piece of teamwork but it wasn’t. You see, we’d been asked to pick images with which we had an emotional connection so we’d all developed and bought into a very clear idea of where we wanted the story to go. Combining all three ideas (the lady, open road with a figure on, and lighthouse shown in the picture) was a huge challenge and incredibly frustrating at first, especially as both my team-members had imagined characters in their settings and the three characters didn’t necessarily work in the same story. Quite a bit of discussion and compromise got us there in the end, though.

An interesting exercise we were asked to do was called ‘What’s in the bag?’ We were asked to imagine one of the characters from the story and think about what they might have in their bag or briefcase. This would help establish what was really important to that character and the sort of person they were. We had to be detailed e.g. if our character had some paracetamol, would it be a branded one or supermarket own-brand, would make-up be Clinique or Rimmel and what sort of condition would it be in. I actually found this a really helpful exercise and, as I pointed out to the group, I thought that what was missing from the bag was also very revealing. For example, I imagined that my character had hair bands with bits of hair still attached to them but no hairbrush which showed a lack of interest in her appearance.

We returned to our groups and completed a fun exercise where we were challenged on genre. We were asked to transpose our world into the wild west (history), the moon in the future (sci-fi), fairytale world (fantasy) or soap opera world (slice of life). It was really interesting seeing the changes this made to everyone’s stories as they shared them around the room.

The afternoon was all individual activity. We were given a new set of pictures all on the theme of love (well, it was Valentine’s Day) but we were told it didn’t have to be romantic love. We could be thinking about friendship or families when, as before, we selected an image that spoke to us and develop the character(s) in that image, then create a story, then write a script for a scene. What was fascinating was that, out of sixteen pictures and eleven delegates, seven of us were drawn to the same picture! This was an image of two old people ambling down a blossom-strewn lane (shown below).

I really loved my characters and the story I developed. When I gave the group the synopsis and read out my script, I got a fantastic reaction. This was incredibly flattering. It was a historic piece – not my usual genre – which reminded me of a piece I’d written on a creative writing workshop many years ago. I’ve always thought about returning to that piece and I’m thinking now that this would be a great piece of work alongside it that I would like to develop further. 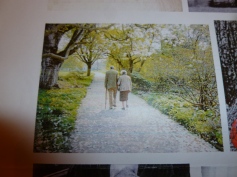 Overall, it was an enjoyable and interesting workshop and, if I’d been a beginner, it would have been a great starting point for unlocking the imagination. What it didn’t really do is teach us how to write a script. But maybe I’m overcomplicating it. After all, isn’t a script in it’s simplest form just a list of names with dialogue and some stage directions? The challenging part is developing the story, characters and setting that our tutor said were the three components of a script. What I personally took from the workshop was a great premise for a story that I might develop, a useful exercise in the form of ‘What’s in the bag?’ and encouragement that I can very quickly and easily come up with characters and a plot that others love. As to whether I can imagine myself moving from novels to scripts, I’m not so sure. I’m already imagining my lovely old couple story as a novel rather than a script, but is that because that’s my default style?

I’m glad I attended. My next decision is whether to take this to the next step. The Stephen Joseph Theatre run scriptwriting workshops on a termly basis. They’re run in batches of six lessons every other week and I’m toying with whether to join one after Easter. As I understand it, delegates develop a script for a play across the time and enhance this through group discussion and the support of the tutor. Twice a year, the plays are performed at an event called ‘Plays and Pinot’. This is a fairly informal event where actors (and some of the writers I think) read out the plays while the audience enjoys a glass of Pinot. It must be exciting for the writers to hear their plays read out. As part of my workshop, I get a free ticket to attend a ‘Plays and Pinot’ performance in a weeks’ time. I’m going to see what that’s like and then make a decision on whether I join the post-Easter course and develop a play.

Can a novelist write more than novels? Absolutely, yes. But do they want to? Hmm. Watch this space!

4 thoughts on “Does a novelist only write novels?”

Back to top
Katie Ginger, Writer

Book reviews from that girl who is always reading.

Blogging about books, libraries and life

Tackling my TBR, one book at a time

The Ladies Who Read

Book reviews from that girl who is always reading.

Blogging about books, libraries and life

Tackling my TBR, one book at a time

The Ladies Who Read